What's the difference in the internet of things (IoT)?

The fundamental objective of the internet of things (IoT) is to obtain and analyze data from assets that were previously disconnected from most data processing tools.

This data is generated by physical assets or things deployed at the very edge of the network—such as motors, light bulbs, generators, pumps, and relays—that perform specific tasks to support a business process. The internet of things is about connecting these unconnected devices (things) and sending their data to the cloud or Internet to be analyzed.

In traditional IoT cloud architecture, all data from physical assets or things is transported to the cloud for storage and advanced analysis. Once in the cloud, the data is used for cognitive prognostics (that is, predictive maintenance, forensic failure analysis, and process optimization).

Fog and edge computing in manufacturing and automation applications are network and system architectures that attempt to collect, analyze, and process data from these assets more efficiently than traditional cloud architecture. These architectures share similar objectives:

In both architectures data is generated from the same source—physical assets such as pumps, motors, relays, sensors, and so on. These devices perform a task in the physical world such as pumping water, switching electrical circuits, or sensing the world around them. These are the “things” that make up the internet of things.

In fog computing, transporting data from things to the cloud requires many steps.

EPICs then use edge computing capabilities to determine what data should be stored locally or sent to the cloud for further analysis. In edge computing, intelligence is literally pushed to the network edge, where our physical assets or things are first connected together and where IoT data originates. 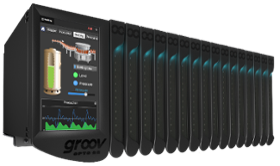 What do you want to do at the edge?

Acquire and communicate data? Connect to existing PLCs/PACs and legacy systems, as well as directly to sensors and actuators. Securely store, process, and communicate their data with databases, cloud services, and other systems. Read a case study: NetDNA communicates with remote assets.

Eliminate PCs? Avoid the cost and maintenance hassles; save space and complexity. Handle all edge computing and data communication needs in the same compact, industrially hardened controller that runs your system.

Provide an operator interface or dashboard? Give your authorized users a simple HMI that they can view on the EPIC's integral high-resolution color touchscreen, or on a PC or mobile device.

Opto 22's groov EPIC edge programmable industrial controller can help you do all these things and more.

How can we help you?

Contact our Pre-sales Engineers today and tell us about your edge project. What do you want to do?
Opto 22 engineering help and product support are free.